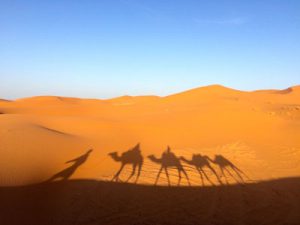 In September and October 2013, the Chinese President Xi Jinping had brought up two strategic initiatives which are jointly known as the “One Belt One Road” Initiative[1] (OBOR), respectively the New Silk Road Economic Road (SREB) and the 21st Century Maritime Silk Road (MSR). These two projects are considered a re-establishment of the historical trade route between China and Europe across the Middle East. This is a trade and investment oriented Initiative aiming at integrity and connectivity in Eurasia.

In respect with tax and taxation, the State Administration of Taxation (SAT) announced a package of ten measures in April 2015 for serving the implementation of the OBOR Initiative[2]. This package is also known as the “policy paper on implementing the OBOR Initiative” through enhancing taxation services and management[3]. Thorough execution and interpretation of taxation agreements are on the top of this agenda. Eliminating mismatches between regional law enforcement and tax disputes are priorities as well.

Taxation information centers assorted by nationalities were firstly promoted in July 2015 on provincial levels for pilot functional testing. Besides, the tax information website for OBOR initiative was introduced to build a comprehensive taxation guidance database covering all the OBOR countries. A hotline for questions on taxation was set up. this is however mainly targeting Chinese enterprises planning to expand overseas via the OBOR platform.

The tax benefits to be enjoyed by each OBOR country are very much depending on the tax treaty they enter into with China respectively[4]. The various double taxation agreements entered many years ago are currently revised to guarantee compatibility within the OBOR plan. Take the newest Sino-Russia Double Taxation Agreement (DTA)[5] as an example, which had included very welcoming withholding tax rates. In this DTA, China is very facilitative in lowering the tax rates on royalties from 10% to 6%, and on interests from 10 %to 5%. Tax rate on dividends was adjusted from 10% to 5% with a higher threshold. Therefore, those who meet this higher threshold under this DTA will enjoy the 5% rate on dividends[6]. Another determinant of tax benefits on dividends is the domestic tax law of each OBOR country, providing that the national tax rate is the preferential tax rate to be applied under a tax treaty.

The General Administration of Customs has also been proactively responding to the OBOR Initiative. One of the OBOR trade facilitations is to launch and promote Mutual Recognition for Authorized Economic Operators (AEO) between Chinese Customs and EU countries. A mutual recognition agreement of AEO was concluded between the EU and China in the form of a decision aiming at more facilitative and time-efficient custom procedures for qualified enterprises[7].  EU AEOs can benefit from this agreement as of automatic customs clearance, providing that their certified AEO status and products are matched in the database between China and EU. Customs cooperation between China and the Netherlands was brought onto the agenda of OBOR forum on customs[8]. Another cooperation with European Anti-Fraud Office (OLAF) was initiated as well[9]. Subsequent to an exchange of information platform started in 2007, a system on exchange of customs information has been established gradually ever since. New Internet technologies and mechanisms into this existing system were encouraged for the purpose of furthering and assisting OBOR realization[10]. With these procedural changes, both Chinese companies and foreign enterprises will find it easier and faster to cross the Chinese border and expand their business.

Substantive changes sometimes are introduced in a piecemeal manner. For instance, tariffs on importation of cotton into China from some ASEAN countries were exempted to 0%[11]. Tariff reduction included in free trade agreements between China and other countries are also considered supplementary momentum to OBOR Initiative, such as the recent ones with Australia and with Korea[12]. A certificate of origin mechanism had been employed to facilitate the actual reduction procedure, which had been proven efficient and also helpful to the OBOR realization[13]. The trend was to have more reductions and exemptions on tariffs, indicated by the president Xi during his visit to India in 2015. International traders hence can expect more benefits coming from the OBOR Initiative and subsequent new policies or new trade agreements.

[5] Agreement between the Government of the People’s Republic of China and the Government of the Russian Federation for the Avoidance of Double Taxation and the Prevention of Fiscal Evasion with respect to Taxes on Income, 13th October 2014, signed on 8th May 2015, the treaty text is available at: http://www.chinatax.gov.cn/n810341/n810770/c1153873/content.html; the announcement of signatures by SAT of China: http://www.chinatax.gov.cn/n810219/n810724/c1603638/content.html, last accessed on 5th April 2016.

[6] Article 10, paragraph 2.1 provides that tax levied on dividends shall not exceed 5% when the beneficial owner is a company (excluding partnership enterprises) which directly owns at least 25% of the capital of the company paying for the dividends and such 25% shall have a value equivalent to or higher than 80,000 Euro.

[7] EU and China sign a joint statement on mutual recognition of Authorised Economic Operators, European Commission, URL: http://ec.europa.eu/taxation_customs/resources/documents/customs/policy_issues/international_customs_agreements/china/info_note_en.pdf, last accessed on 18th April 2016; Circular of the General Administration of Customs, No. 152, 2015, URL: http://www.customs.gov.cn/publish/portal0/tab49564/info776764.htm, last accessed on 18th April 2016; Remarks on promoting mutual recognition of AEO, cooperation and win-win in between of customs and enterprises, URL: http://www.customs.gov.cn/publish/portal133/tab69669/.