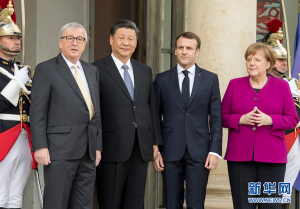 On the third day of Chinese President Xi Jinping’s visit to France, the French President Emmanuel Macron took the unprecedented step of establishing a united European front to compete with China’s global hegemony, specifically China’s One Belt One Road strategy. Macron invited EU leaders Angela Merkel and Jean-Claude Juncker to join the meeting with Xi. This meeting was referred as a “high-level meeting on the challenges of multilateralism” by the French government. The core of this meeting was the discussion of climate change and multilateral relations between Europe and China. Macron’s intention of forging a United European front upon Xi’s visit cannot be easily assumed, however, it can be assumed that Macron keeps a questioning attitude towards the two-way street of investment and trade between the Europe and China regarding China’s Belt and Road Initiative.

Before the meeting with Macron, Xi first arrived Italy where the government signed up Xi’s landmark new Belt and Road Initiatives, which is a massive project to undertake Asia to Europe. Italy became the first major Western power to endorse China’s Belt and Road Initiative in order to revive its struggling economy. While it has raised critics from Washington and the EU, stating that it will give China too much autonomy for gain its own economics interest, although Xi consistently emphasizes it would be two-street of investment and trade. For the EU leaders in the meeting, on the one hand, they all expressed the wish for greater cooperation and deep ties between the EU and China, on the other hand, they hold the concern about unfair competition and continuing coordination on climate change. As Juncker said, they acknowledged the coordination and deepening ties with China as a strategic partner, but they also stress the competition between China and the EU. Although Xi stresses Belt and Road Initiative as a two-way cooperation and win-win outcomes, the commission leaders urge Beijing government to give EU companies the same access to Chinese markets as Chinese companies enjoy in the EU.

Xi’s visit poses a particular challenge for Macron, who wants to deepen EU ties with China and secure lucrative contracts for French companies, while also pushing back against Beijing’s growing global ambitions. Macron is calling for “strong Europe-China partnership”, but it must be based on “strong multilateralism” and “fair and balanced”, which means they are not going to embrace China’s Belt and Road Initiative unless it goes in both directions and increases the ‘reciprocity’ regarding the EU market access to China. He expressed his thanks to Xi for the support to counter climate change but also urged his Chinese counterpart to “respect the unity of the European Union and the values it carries in the world”. So far Macron will press Xi to ensure the project are fair and increase the participation of French companies in China’s market.

It is important for the EU leaders to seek for more fair and reciprocal cooperation with China and also adopt policies to help European companies compete with China’s global ambition. A full China-EU summit will take place in Brussels on April 9.