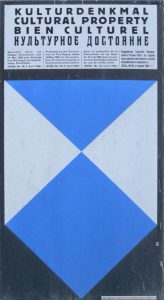 Working in The Hague, being involved in the subject of Art Law, my mind goes to the 1954 Hague Convention for the Protection of Cultural Property in the Event of Armed Conflict.

An excellent combination, working here where the first use of the term Cultural Property occurred in an international legal context.

However, what is Cultural Property?

The concept of “cultural property” refers to the idea that something (a product of human activity such as an artifact, artwork, style…) can be a property of a community which consequently demands a series of collective rights concerning ownership, access, and use.

It presents questions concerning cultural continuity over time, intended as an overlapping chain of practices, traditions, norms, and beliefs that build-up the collective identity.

The value of an object for a particular culture might be the basis for a cultural property claim against someone who (another cultural group or a member of it) acquired an object unjustly and are himself culturally distant from the original context of the cultural object itself.

Lettres à Miranda, by the French art critic Quatremère de Quincy, published in July 1796 is the first manifesto against the plundering of artworks by right of conquest (in this case we are talking about the requisition of Italian artworks made by Napoleon’s French army, following his first military campaign in the Peninsula). The reason that led Quatremère de Quincy to disagree with the move is the idea that only where they were placed originally, included in the cultural milieu that produced them, those works have sense.

Repatriation concerns the return of material heritage, or human remains from museums or other institutions to their culture, nation or original owner.

In some case, repatriation might seem uncontroversial (if an object was clearly stolen or unjustly acquired). In other cases, claims for return can become controversial, and this issue is the core of many international conventions.

The UNESCO Member States are encouraged to strengthen their national legislation in protecting cultural property against illicit trafficking.

Finally, beyond issues concerning the repatriation of art and artifact, some ethical questions arise and, consequently, it seems that an ethical approach to solving this kind of dispute could be more satisfying.

For example, having recourse to the Washington Principles, a treaty that committed its signers to make the best effort to return the Nazi-looted art, whose the 20th Anniversary has been celebrated in Berlin in November 2018, could be the right way.

Nowadays many leading institutions are reassessing their collections to set out the process by which objects can be claimed for the return to nations and/or communities of origin.

A new awareness and sensibility seem to spread out across museums or auction house.

In England, important institutions including the British Museum and the Victoria and Albert Museum are working on provenance research to provide an honest assessment for visitors, first of all, striving for accurate labels.

In Germany, the Culture Minister has announced that € 1.9 million will be made available this year to museums and other institutions to research objects acquired during colonial-era as well as in France, the President Macron commissioned a report in November 2018 that called for the permanent repatriation of African artifacts.

Recently, Italy could welcome back ancient looted artworks thanks to the collaboration with Christie’s London which voluntary returned them at a ceremony at the Italian Embassy in London on February.

In the Netherlands, the Dutch Museum of World Cultures (NMVW) published guidelines last month for countries who wish to claim stolen art or an object of important cultural significance.

Even the Rijksmuseum in Amsterdam is now the latest institution to consider returning looted artifacts from its collection: the director Taco Dibbits has said that the museum “should have done it earlier and there is no excuse”.

The theft and the looting of cultural property erode the collective identity: the crimes against the cultural heritage should be considered as violations of fundamental human rights and this current trend to cooperate to reach just and fair solutions should be welcome and supported.