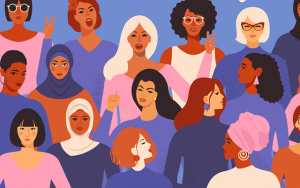 International Women’s Day is just around the corner. On 8th March of each year, women around the world are celebrated and paid tribute to the struggle and emancipation of women.

What is Women’s Day?

The holiday finds its roots in the early 20th century before the beginning of the First World War. At that time, women had been fighting for equal rights and emancipation of women and workers, as well as for equal voting rights for women in a male-dominated society.

This year’s United Nations theme is “Gender equality today for a sustainable tomorrow”. This year’s theme is to appreciate the contributions of women and girls around the world who are playing a leading role in adapting to, mitigating and responding to climate change to create a more sustainable future for all.

But it’s not just the United Nations that celebrates Women’s Day with a specific theme-to. In 2022, the International Women’s Day initiative has dedicated itself to the #BreakTheBias campaign. Under the hashtag, the website calls for a world free of prejudice, stereotypes and discrimination, but full of diversity, equality and inclusion, whether in society, at work, in schools and universities or in private life.

Copyright in a work

Now the question arises as to how far the hashtag can be used. It is possible that it is protected by copyright.

The purpose of copyright is to protect the author – i.e. the creator – of literary, scientific and artistic works in his or her intellectual and personal relationship to the work and in its use. The protected works include personal intellectual creations, in particular linguistic works, works of music, dance and visual arts, photographs, cinematographic works or representations of a scientific or technical nature. The author enjoys protection of his rights in the work until 70 years after his death.

Only the author has the right to publicly exploit and reproduce his work in physical form. However, he may grant a person who is not at least a co-author the right to use the work in individual or all ways. The scope of this right of use is determined by the author.

Anyone who unlawfully infringes the author’s right may be sued by the infringed party for removal of the impairment, or, if there is a risk of repetition, for injunctive relief. Damages may even be paid.

On platforms such as Twitter and Instagram, hashtags offer the possibility of tagging and assigning posts to overarching topics. They help to bring together thematically related discussions within social networks. They are automatically recognised as keywords and displayed together with other posts containing these hashtags on an overview page.

But not everyone approves of the use of the specially created hashtag. In Germany, for example, copyright and trademark problems accompanied the use of the Twitter hashtag #Rio2016 at the 2016 Olympic Games in Rio de Janeiro. The combination of the components is registered as a trademark, so there is at least relevance under trademark law.

Background
Under the German Olympic Protection Act, the German Olympic Sports Confederation (DOSB) and the International Olympic Committee (IOC) enjoy protection over the Olympic emblem and the Olympic designations. This protection goes further than the usual copyright and trademark law in Germany. The DOSB has reserved the right to take legal action against companies that were not official sponsors of the Games for using the #Rio2016 and #OlympicGames. The aim is to strengthen the companies that pay for the trademark rights of the Olympic Games. To date, the question of the ban on hashtag use has not been settled in court. However, the majority assumes that such use by non-sponsors does not violate the copyright of the DOSB and the IOC. The presumption is strengthened by the fact that they relaxed the strict advertising guidelines a year later because of investigations by the Federal Cartel Office.

Legal classification
The legal classification of the combination of hashtags with words of speech is difficult. The hashtag itself is not protected by copyright, but in combination with words it can certainly have copyright character as a linguistic work, i.e. works in which the intellectual content is expressed by means of language. The linguistic work must serve to convey information, i.e. to communicate a verbal, intellectual or emotional content.

Individual works on the web such as websites can also constitute works in the copyright sense. This is to be distinguished from content from users of a social media platform such as Twitter (user-generated content). In the case of user content, it depends on whether the platform offers the possibilities for self-created designs or leaves no room for this. In the case of social networks, the platform itself will usually exclude a genuine creative design by the user. However, insofar as it is possible not only to freely design the page by selecting various predefined options, but also to integrate one’s own content and files of various kinds, it depends on the level of design with which this is perceived and implemented.

For the protection of #Rio2016, the discussion focused on the function in which the hashtag was used. It is considered permissible to use a trademarked hashtag as a private person or in a communicative way, for example to stimulate discussion or to express one’s own opinion. On the other hand, it is not permissible if it is used in a commercial manner, in particular when advertising one’s own products. This is what distinguishes the relevance of trade mark protection against commercial use, against which the trade mark owner can take legal action.

International Women’s Day is now taking a different approach to the use of the hashtag. The website launched a #BreakTheBias campaign by asking website visitors to share a photo, video or other presentation with their arms crossed in front of their torso on social media channels and tagged with the hashtag. In this way, participants show solidarity with the campaign and with all women in the world and spread the message to fight against the spread of prejudices of all kinds for a better, inclusive world. The initiative, as the creator and thus the originator of the lettering, publicly gives its consent to the use of the hashtag by everyone with the call; it formally invites the visitors to use it in order to achieve a higher reach of its message. However, the explicit consent of the author is not necessarily required for use. It is already implied when the hashtag is made available for further use – on Twitter, for example, by retweeting.

Regardless of this, it is more important than ever to fight for equality and inclusion. Emancipation has since suffered setbacks from various natural or political events, most recently the Covid 19 pandemic and its challenges. But development and equality go hand in hand, so it is our duty to constantly act for a better present – in this sense: #BreakTheBias.