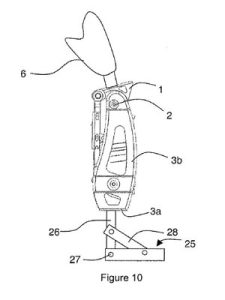 The International Day of Sport for Development and Peace (IDSDP), celebrated annually on 6 April, is an opportunity to celebrate the positive role of sport and physical activity in communities and in the lives of people around the world.

Sport in all its forms is highly valued at the professional level or in everyday life, serves to fundamentally strengthen social bonds and promotes sustainable development and peace, as well as solidarity and respect for all. These values are passed on and fundamentally borne by athletes and spectators all over the world, especially at the Olympic and Paralympic Games.

However, the Games are not only about competing for the coveted medals, but also about the safety of the athletes participating in the Games. In the course of this, the World Intellectual Property Organization (WIPO) reported on the use of prosthetics at the Paralympic Winter Games in Beijing, which took place in March 2022, especially in the field of skiing and snowboarding.

Before the development of sports prostheses, it seemed impossible for disabled athletes to achieve maximum performance, as everyday prostheses are not designed for such a load. However, this did not stop skiers who skied with only one leg after an amputation from practising the sport.

Before the invention of special sports prostheses, professional athletes had to resort to other solutions. For example, the International Paralympic Committee (IPC) required para-athletes in alpine disciplines to mount a ski or snowboard boot on their prosthesis. But this method was associated with many risks, as the athletes did not have a firm grip on their equipment.

Now the ProCarve winter sports prosthesis from Ottobock was developed to solve the problems of adhesion. This is because it provides a direct connection between the leg prosthesis and the sports equipment. With the invention, the skis are connected directly to the prosthetic foot. Lower leg amputees who still have intact knees only use the foot part of the prosthesis with a cushion.

The patent was granted to Ottobock as the inventor in spring 2021. Patents are granted for inventions in all fields of technology, provided they are new, based on an inventive step and industrially applicable. An invention is considered new if it does not belong to the state of the art. The state of the art includes all knowledge which has been made available to the public by written or oral description, by use or in any other way before the date relevant for the period of filing of the application. The patent has the effect that only the patentee is entitled to use the patented invention within the scope of the applicable law. Use by third parties is only permitted with the consent of the inventor. The patent lasts for twenty years, starting on the day following the date of application.

The innovative feature of the ProCarve prostheses is the use of motion sensors. These kinematic sensors record all the necessary geometric movement characteristics at a central point. The prosthesis is therefore designed to compensate for unevenness on the slope. Hydraulic damping displaces the air in the prosthesis by means of pneumatic damping. For this purpose, athletes use small air pumps with which they can adjust the hardness and stiffness of their leg prosthesis. This serves in particular to adapt to the snow conditions.

The IPC has approved the patented prosthesis for use at the Paralympic Games because studies have confirmed its safety.

The athletes also report a clear improvement in their performance and safety. This is because the para-athletes must be able to rely completely on their prostheses. This ensures that they can take part in the Games and demonstrate their top performance without worrying about their safety.