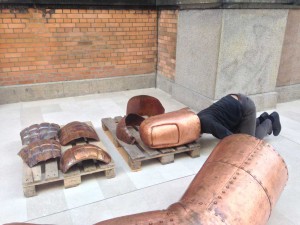 The 24th of June the Court in Rotterdam, gave judgement in the case Kreuk vs. Vo. [1] In this case Bert Kreuk, a Dutch art collector, sued the Danish-Vietnamese artist Danh Vo because of a default of contract. Vo had failed to deliver a piece of art for “Transforming the Known”, an exhibition of Kreuk’s collection in the Gemeentemuseum (Municipal museum) of The Hague.

Kreuk sued the artist for €898,000. Despite the fact that the judge decided that Kreuk won the case, the artist was not condemned to pay the sum of money that was demanded, instead  Vo got the order to fulfill the original assignment  (which means in this case that Vo still needs to create a big and “impressive” piece of art for the art collector). In the words of the Court: By fulfilling the contract the artist needs to take the demands of the art collector into account, which means that he needs to create a piece of art that “already at first sight, partly because of the size of it, will be experienced as impressive by the spectator”.

The representatives of Vo denied that there has ever been a contract, at least not on paper. The judge declared that there has been sufficient evidence to assume that Kreuk and Vo came to an agreement and that Vo was bound to create a piece of art for Kreuk. The gallerist, who can be considered as the agent of Danh Vo, contacted Kreuk right before the exposition and told him that Vo’s father has had a stroke and that it wasn’t sure yet if Vo could be there and if he would be able to continue with the exposition in The Hague. Kreuk responded that he understood that the artist was not able to create something really special, but he didn’t want to be empty-handed either. Eventually Vo sent a small piece of work to Kreuk, together with an offer to draw up a loan contract for the piece.

The legal question here was if the contract ever existed and what the precise content of that contract would have been if it did. Kreuk succeeded in delivering sufficient proof for the fact that he reached an agreement with Danh Vo and his gallerist on the 9th of January 2013 regarding the work or works which would have gotten into the possession of Kreuk after the exposition. Because of the fact that a contract existed and because of the fact that it wasn’t executed as agreed upon, the judge declared that Vo was in breach of contract.

Due to this judicial finding of fact the judge applied article 7:407 (2) of the Dutch Civil Code to the case. This regulation states the following: “In the event of two people together receiving an assignment, each of them will be fully liable regarding a default in the fulfilling of the assignment, unless the default can not be hold against him.”

The application of this regulation led to Vo and his gallerist being condemned to execute the assignment. Which this case means that Vo is bound to create the piece of art and deliver it to his gallerist, who would have the duty to deliver the piece of art to Kreuk. The court ordered Vo to create, specially for room 38 of the Municipal museum of The Hague, to his own artistic view, one or two room-filling pieces and to deliver them to his gallerist, under penalty of a penalty payment of €10,000 per day that he fails to comply, with a maximum of €350,000.

Meanwhile Vo has made a public statement that he will appeal the Court’s decision and that Kreuk can forget about his piece of art. In Vo’s delicately chosen words: “he can shove it up his ass”.