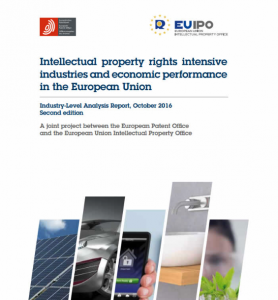 Intellectual Property intensive industries in the European Union are well alive and have a growing importance for the economy. This is the general conclusion of a report written by the EUIPO (European Union Intellectual Property Office), along with the EPO (European Patent Office), and published in October 2016. This report, based on research and surveys completed over a period stretching from 2011 to 2013, follows a previous one based on the 2008-2010 period.

This research is an answer to the need to keep “innovation” as a focus of European growth, as was clearly stated in “Europe 2020”, the EU’s economic growth strategy from 2010 to 2020. Indeed, the main purpose of Intellectual Property is to encourage, and protect, innovation, and therefore keeping track of the importance of IP-intensive industries can give us an idea of the state and liveliness of innovation in the European Union.

Virtually all IP rights have been not only considered for the study[1], but also compared, which allows us to realize where IP related economy is most active. The study also takes into account gross domestic product as a main economic indicator, but also employment, external trade and wages.

The overall results of the study are quite positive, since the weight of IP-intensive industries increased between 2010 and 2013, and today they generate about 28% of all jobs in the EU. This represents more than 42% of the total European Union GDP, or an equivalent of 5,7 trillion euros. Moreover, it is interesting to note that IP-intensive industries represent the major part of EU external trade.

However, digging a little deeper, into the several sorts of IP rights, and their respective roles, some diversity can be noted. For example, trademark industries account for 36% of the European GDP, when patent or copyright industries respectively account for only 15% and 7%. This can be explained by the fact that virtually all industries can, and do, register trademarks, whereas copyright and patent are relatively limited to industries where new works, concepts or objects are created.

This study, which therefore confirms the importance, and a growing one, that IP plays in the European Union economy, is very positive news. As it was not within the scope of the research, we are left with the facts but no indication of policies or general directions that are or should be taken by the government and public bodies in order to go further and strengthen this prevalent role that IP plays, invigorating an economy that needs it.