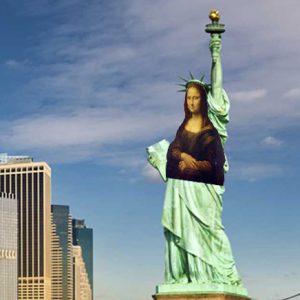 Article 4 of the Declaration of the Rights of Man and of the Citizen proclaims, « freedom consist in being able to do anything that does not harm others ».  Bearing this in mind, while American judges seem to seek a fair balance between private and public interest, French ones maintain a strict interpretation of the protection of the author’s rights on his work.

This strict interpretation of the French Copyright Act led to a recent verdict that Jeff Koons’ company was infringing, while Koons’ defence was built on the exceptions of freedom of expression and parody.

One might wonder if this the end of the artistic movement of ‘appropriation art’.

Appropriation art, born in the 60’s/70’s, defines an artistic movement, which consists in copying or getting inspired by all or part of an already existing work to create a new one, for the purpose of reflection, criticism or parody.

Elaine Sturtevant is believed to be the main instigator of this movement. But one could say that, already before, Pablo Picasso openly insisted on finding his inspiration in the works of his masters. Whereas at that time, no one could see any legal issue with this movement, criticism has become more apparent in the last decades.

This judgment is an opportunity to reconsider the way in which the French judge apprehends the legal questions which arise with Appropriation Art. Moreover, it is an opportunity to wonder about the major differences between French and American law. “Droit d’auteur” against “copyright”, fair use, counterfeiting, freedom of expression… All interrelated concepts but often in conflict.

The two artists
Jean François Bauret, a French advertising photographer who died in 2014, had developed a personal work of black and white naked portraits. Amongst these portraits, created in the 70s, a portrait called Enfants, depicting a naked boy and a girl.
Jeff Koons is an American artist specialised in pop-art who often finds his inspiration in prior works made by other authors.  He is acquainted to tribunals, both in France and in the USA, because of this method of creation.

The heir’s reaction
In the commented case, the heirs of Jean François Bauret discovered, following his death, that Jeff Koons had sculpted a statue of two naked children, named Naked, displaying obvious similarities with the photography Enfants. The sculpture had not been exhibited in France yet until the George Pompidou center in Paris decided to dedicate an exhibition to Jeff Koons. Made aware of this, the heirs of Bauret sent a cease and desist letter which was not answered. However, the sculpture was removed from the exhibition stating that it was damaged during transportation.
The sculpture Naked however remained published in the leaflet accompanying the exhibition. Jeff Koons’ company – responsible for the organisation of the exhibition in the name of Jeff Koons – was therefore sued for infringement before the Tribunal of Paris.

Jeff Koons’ defence
Koons did not deny that he had been inspired by the photo Enfants. However, it was – firstly – asserted that Koons had transformed it into “a new independent work… which bears the imprint of his personality.” The plaintiffs’ claims were based on articles L 112-3, L113-2 and L113-4 of the French Intellectual Property Code, which appears to recognize protection for the work of transformation, without prejudice to the rights of the author of the original work. Freedom of expression was another line of defence. Based on the protection of this core principle, the European Court of Human Rights already ruled over copyright in the case of Asby Donald eta/France on January 10th, 2013. Finally, Koons invoked the parody exception, as provided by article L122-5 of the Intellectual Property Code.

The argumentation was therefore clearly build towards the recognition of the appropriation art by the law, which should, then, provide the author of the work with a similar protection to the one granted to the author of the initial work.

Reaction of the Tribunal
Nevertheless, the Tribunal of Paris rejects these arguments and recognises that there was an infringement.  The judge rules that the authorization of the author of the first work is always necessary and hasn’t been given in this specific case. Further, the judge rules that freedom of expression could trump copyright only when there is a legitimate and proportionate interest. Finally, the judge reminds that the exception of parody implies the notoriety of the initial work as well as the aim for the second work to establish a critic or to make the public smile – which was not apparent here.

Could this solution have been different if the judgment had been rendered under US law? Would Jeff Koons’ company have a chance to see its claims granted?

In France, copyright is equally divided between patrimonial rights, which allow the right owner to receive royalties for the exploitation of his work, and moral rights, which protect the non-economic interests of the author. In the United States, the concept of copyright gives more importance to the economic part while the moral right is much more restricted.

Copyright definition
According to Pierre N. Leval, judge of the Appeal Court in the United States, copyright – as defined in sections 102 to 106a of the Copyright Act – is not an inevitable, divine or natural right, which confers on the author absolute ownership over his creations. It is intended to stimulate activity and progress in the arts, for the intellectual enrichment of the public. Bearing this definition in mind, section 107 provides for the exception of fair use. Fair use permits to hinder the monopoly offered to copyright owners while allowing to re-use a protected work for criticism, commentary, information, learning etc. In such a case, the authorization of the author of the primary work is not required.

Exceptions to copyright exists also in France (amongst others parody and freedom of expression) and French law does recognize the right to be inspired by an existing work. This is the so-called composite work. In such a case, the authorization of the author of the original work is always needed (as pointed out by the Tribunal of Paris in its judgment of March 9th 2017), which largely limits the possibilities.

Fair use exception
Fair use is subjected to a sovereign appreciation of the judge, on a case-by-case analysis and based on 4 criteria set out in the Copyright Act: the purpose and character of the use of the original work (1), the nature of the original work (2), the quantity used and the durability of the work (3) and the potential market or value of the initial work (4).

If the work passes the fair-use test, the new work is considered to be a “derivative work” and its author is granted with an independent protection only on the new part of the work. In the judgment, Campbell v. Acuff Rose (1994), the US judge went even further and recognized the existence of a “transformative work” which allows a complete protection of the new work (and not just the addition made to the primary work).

It would be very well possible that the Naked-case would have turned out differently in the US. It could have gone either way however. Koons has had court cases in the US in which his work had been labelled ‘transformative’ and therefore not an infringement (2006, Jeff Koons v. Andrea Blanch) and in another (older) case the judge considered Koons’ work an infringement (1989, Roger v. Koons ).

Another appropriations artist, Prince, was convicted in 2008 in the US, the judge considered that he had altered the work of Cariou.

Even if the appropriation argument is more likely to succeed in the US, it remains highly uncertain and largely depends on the judge’s assessment!